How to get startup ideas in 10 diagrams

I have not been a founder for six years. My last startup collapsed after we failed to make the business successful and ran out of runway.

Since then, I have been working as a software developer full-time. But some recent developments (I am going to be a dad) have inspired me to try again—this time by myself.

I am right at the beginning, and I don’t know what I am going to build. I believe I have a few solid ideas.

The problem is, I am not sure. Are they any good? Do I need to think of better ones? How do I go about doing this?

Consequently, before diving in, I have been meticulously researching the web for strategies on startup ideation. How do you come up with ideas? How do you know if they are any good? What are the best methods for validating them?

I thought I’d share my research and learnings diagrammatically. There’s no better way to learn something, than trying to explain it simply. Richard Feynman knew this well.

In my research, repeatedly, I kept coming back to Paul Graham’s ”How To Get Startup Ideas” essay. There are many articles and forum posts on the internet that reference Paul’s essay somehow, whether that be directly or indirectly—and so they should, it’s excellent.

I have not read “How To Get Startup Ideas” for seven years, but after returning, it’s clear that it encapsulates so much advice that’s still relevant today. Many articles online today are either coming to a similar conclusion or regurgitating his work in some way.

For this reason, I have based most of my diagrams on Paul’s original essay. Nevertheless, many of the concepts shown below are encouraged by other gurus in the startup/indie maker space and are not solely attributed to Paul.

Another incredible source of knowledge was Jeron Paul’s article titled, ”Startup Ideas: How The Best Founders Get Them And Why Novelty is Overrated.”

Jeron agrees with Graham in many regards, apart from novelty. Graham believes “a novel idea with little to no competition is a key component,” whereas Jeron argues it’s not.

The best ideas are likely “Paradigm-Shifting / Revolutionary Ideas,” which are a combination of highly novel and highly useful. However, these are extremely rare. Sarah Kaplan’s recent research on patent innovation shows novel patents have the highest economic value, but only 1% of patents actually fall into this category.

Highly novel and highly useful are what Silicon Valley would call a “Unicorn.”

Jeron argues that it’s better to aim for highly useful than for highly novel ideas because:

Build for the few, who want a lot 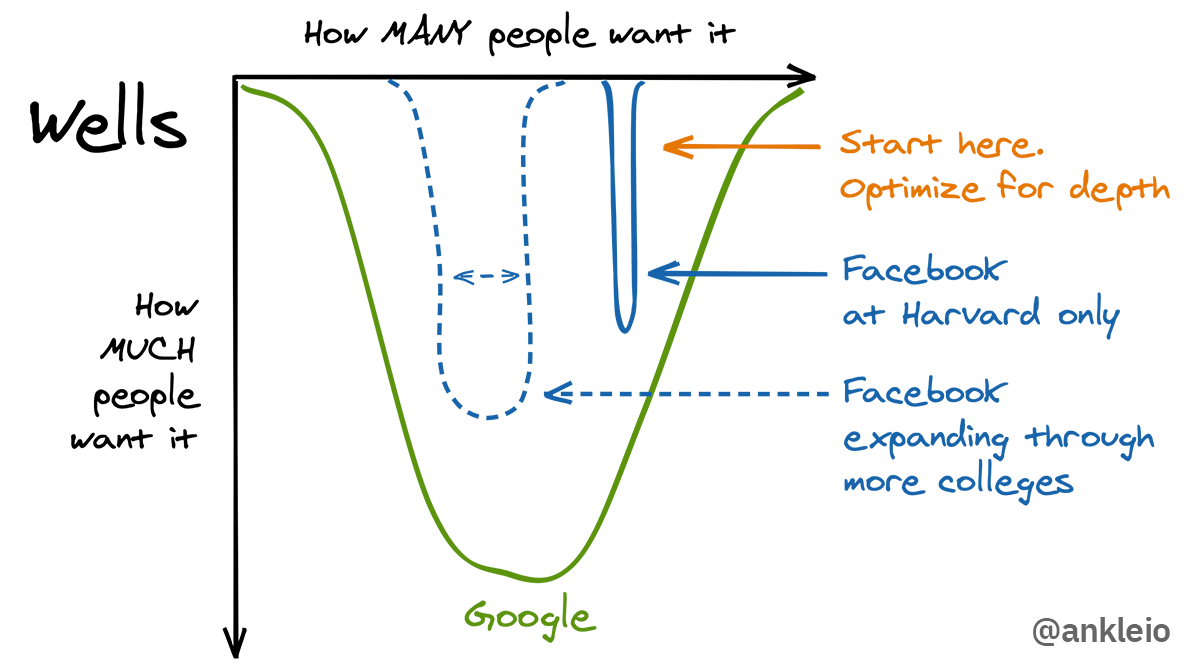 According to Paul Graham, when startups launch, they at least need some users who need what you’re making urgently. Therefore, the initial target user group is relatively small because if it were large, it would probably already exist. This means you have two choices:

Only a few companies like Google have products that many people want a lot. Their graph draws a wide and deep well.

Many ideas are usually wide and shallow—for example, a social network for pet owners.

But, nearly all good ideas started as narrow and deep wells—for example, Facebook in the early days when it was just for Harvard.

When thinking of ideas, ask yourself, who wants this right now, even if the product is a questionable prototype? Graham states it’s best to optimize for depth and speed in the beginning, i.e., how much people want it. By doing so, you almost always optimizing for narrowness anyway. 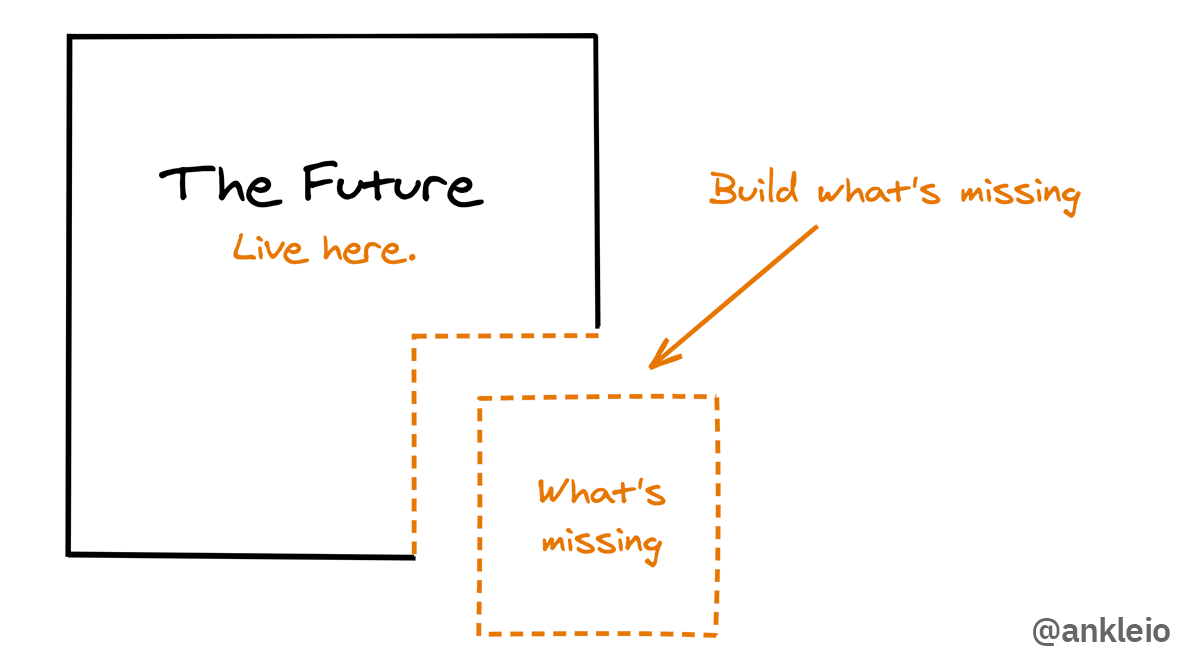 Ideas can be very niche, with a very narrow “well,” so how can you tell that your idea will blossom into a giant company or even a profitable one? Successful founders often don’t foresee the path to expansion; it forces itself upon them gradually. Sometimes, it’s obvious, but a lot of the time, it’s not.

So if you can’t predict the path out of an idea, how do you choose the best ideas to pursue?

According to Graham, it’s to “live in the future, then build what’s missing.” Which is a phrase he coined by combining the wisdom of Robert Pirsig:

“You want to know how to paint a perfect painting? It’s easy. Make yourself perfect and then just paint naturally.”

and Paul Buchheit, who says people at the leading edge of a rapidly changing field, “live in the future.”

Essentially, the best way to have good startup ideas is to become the sort of person who has them, by having a prepared mind and by being at the leading edge of a field, either pushing it forward or as a participant. 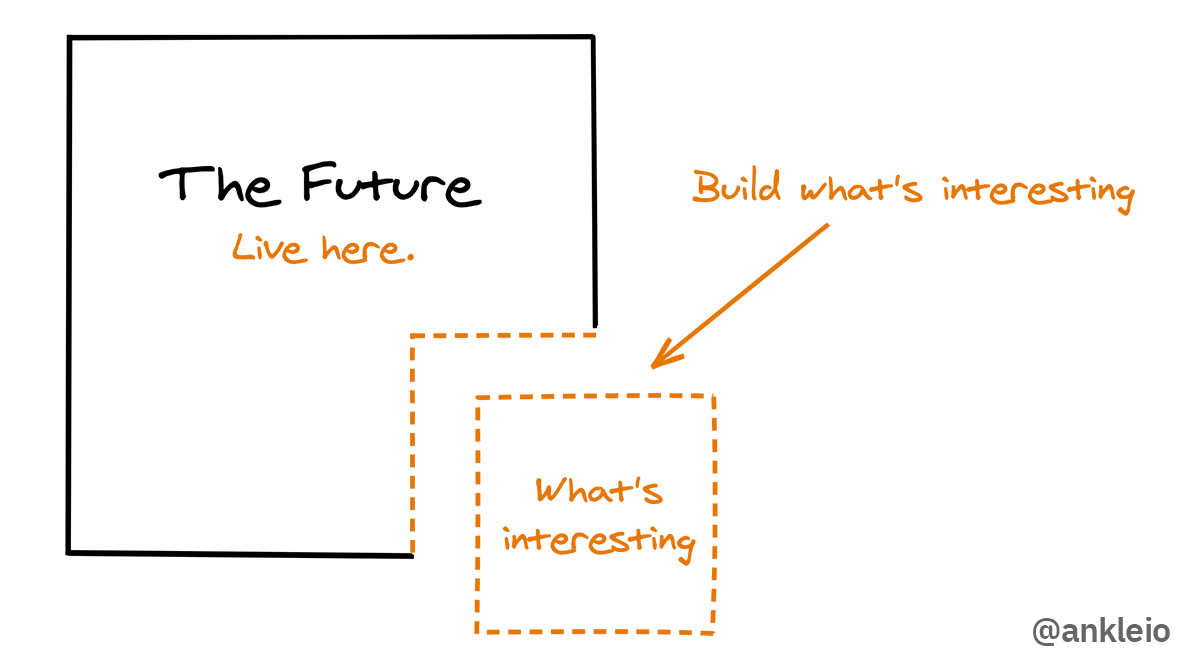 Building on the mantra of “live in the future,” once you are there, how can you find what’s missing? There are a lot of things missing in the leading edge of a field, but they won’t be obvious as startup ideas.

You need to notice ideas by running a background process that is constantly looking for things that are missing, paying particular attention to things that irritate you. A good trick is to work on difficult problems driven by curiosity. Work on side projects that seem cool, which naturally leads you to the edge, because it’s novel and interesting. Here is where you’ll find the missing piece.

Scratch your own itch 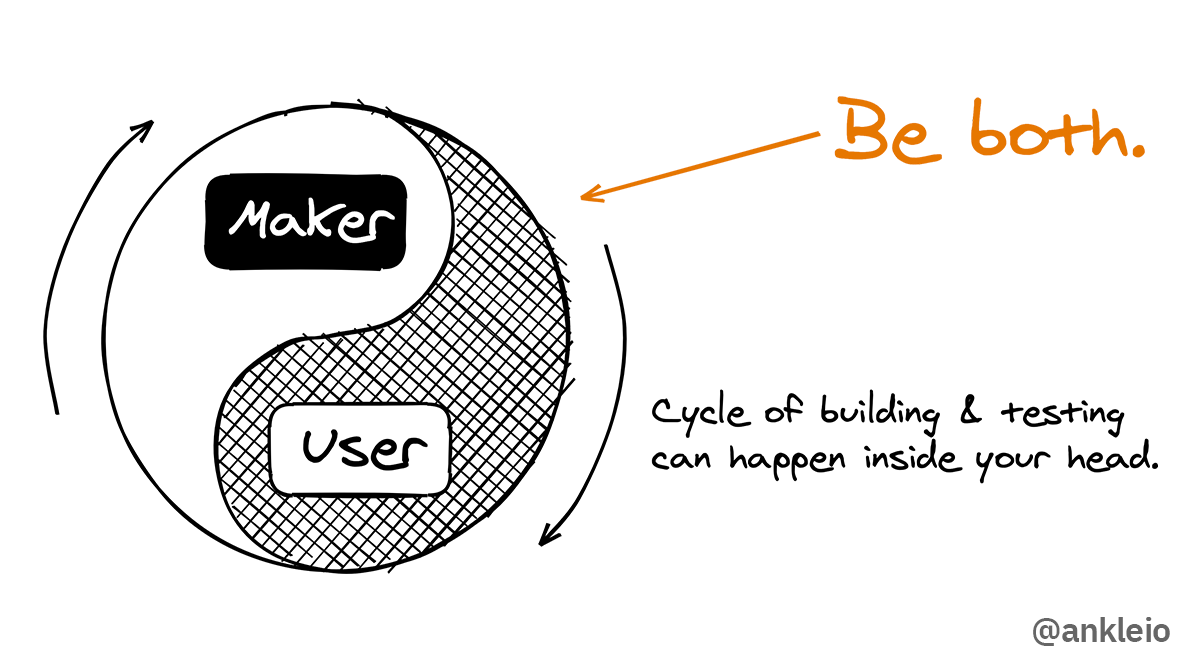 This term was first used in 1999 by Eric S. Raymond in The Cathedral and the Bazaar:

“Every good work of software starts by scratching a developer’s personal itch.”

Often, good ideas stem from personal problems because solving a problem that you know exists means there’s a good chance other people are experiencing a similar problem. There’s, at the very minimum, a market for one.

Additionally, if you are both the maker and target user, as Graham puts it, “the cycle of generating new versions and testing them on users can happen inside one head.” This means iterating on your idea can happen quickly and organically, without the need for external validation early on.

By being a user, you have a deeper understanding of the problem and the best method of solving it. There’s less need for research, talking to potential customers, understanding their pain points, and trusting if it’s really worth solving. 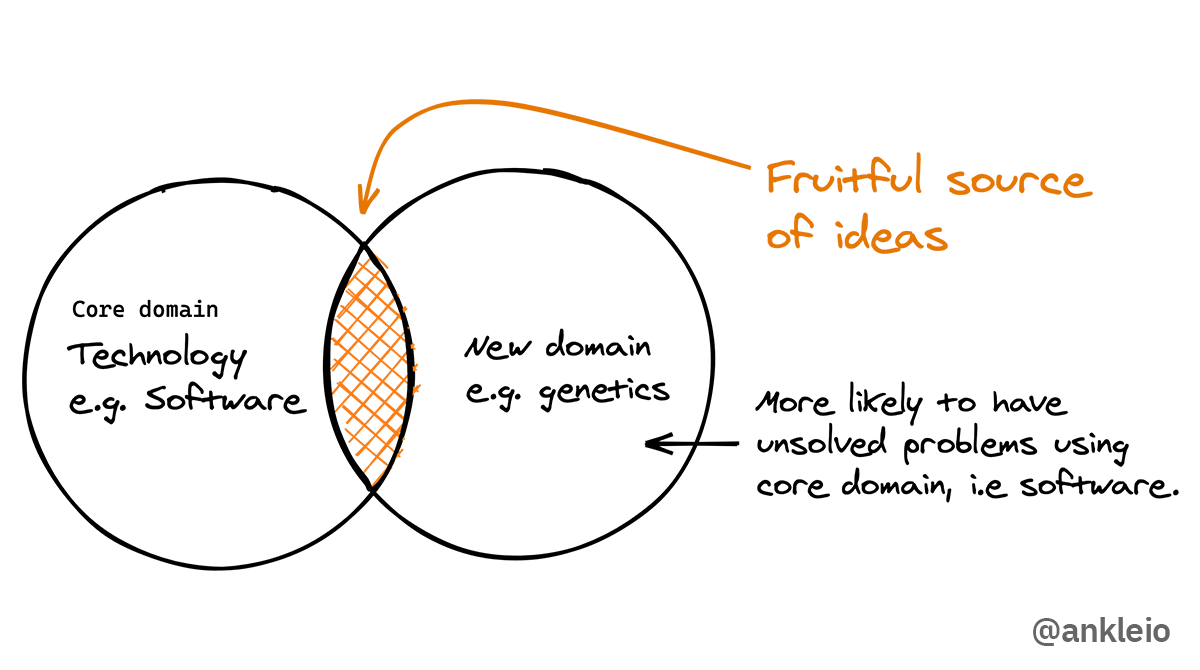 Ideas are often plentiful when you are extremely well versed in a particular domain, such as software, and you become interested and start exploring new domains, like genetics.

This is especially apparent when the opposing domain does not have many people from your domain solving problems. For example, geneticists are less likely to have solved their problems with software.

Beyond this, another advantage of exploring new domains is that you are more likely to challenge the status quo. Why? Because entering a new field brings a certain ignorance and naivety with it. A hint of which can be extremely useful when thinking of ideas. 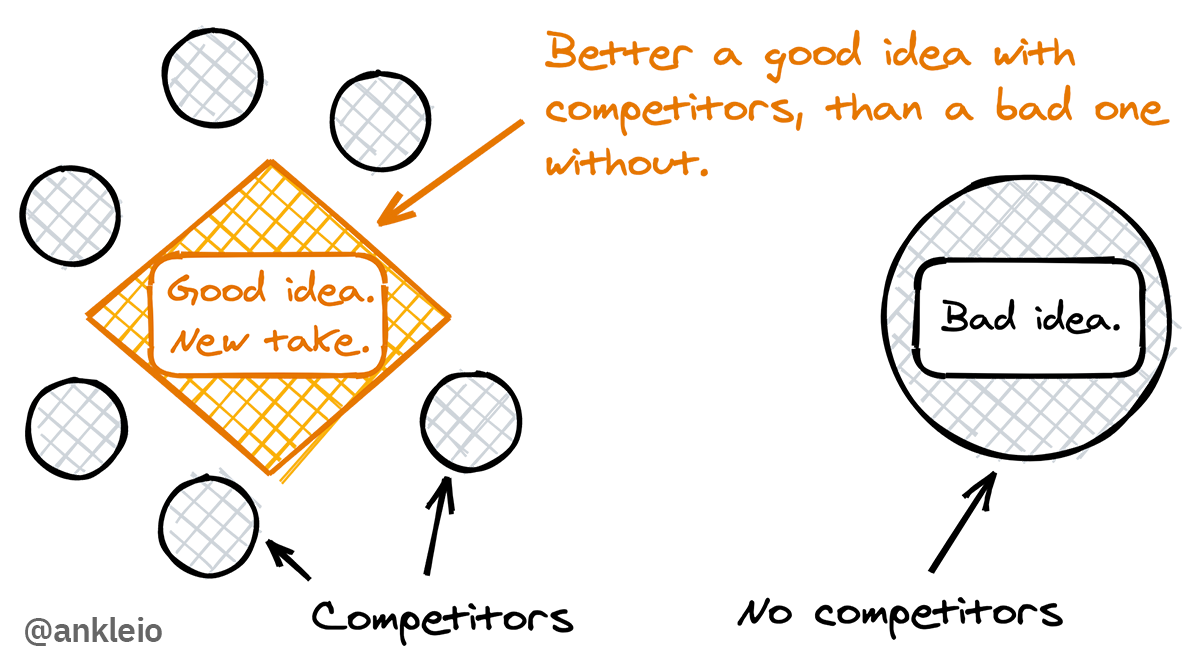 Good ideas seem obvious and frequently leave you feeling like you are already too late. More often than not, your idea is not unique, and this isn’t a bad thing.

Graham is quick to point out it’s exceptionally rare for startups to be killed by competitors.

It’s more important to focus on users and their urgent needs than competitors, paying particular attention to things that perhaps your competition is overlooking, and that will differentiate you. Competition means there is a demand for your problem.

Furthermore, if the market is crowded, this is actually a good sign. It means there is both a high demand for the problem, and no one is solving it sufficiently. 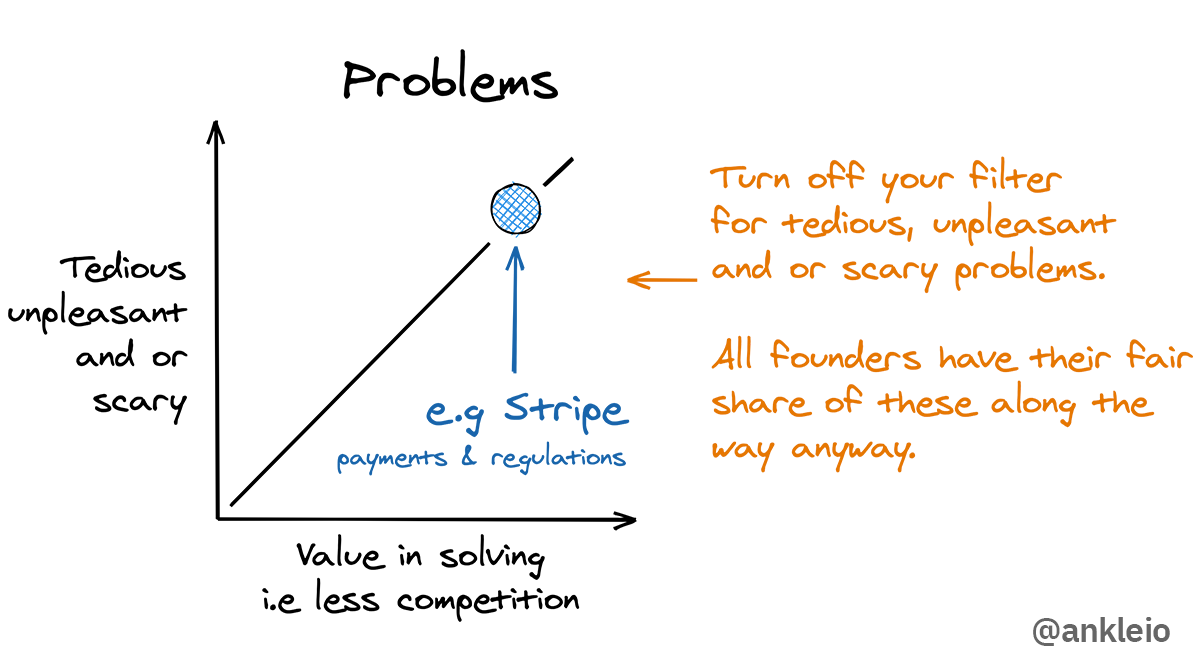 Another method for finding lucrative ideas is to turn off the filters in your head for unsexy, tedious, unpleasant, and or scary problems.

The real world is messy, and most people don’t want to solve problems that are undesirable, scary, or challenging. For this very reason, there is less competition and more value in solving them.

What most founders don’t consider is that the road ahead of any startup has it’s a fair share of laborious, unsexy, challenging, and difficult obstacles to surmount. Thus, ignoring these ideas early on is irrational, especially if the upside opportunity is greater than sexy/trendy ideas.

Two methods of turning off these filters are by:

Unrelated to Paul’s essay, but nonetheless a useful concept, is The Hedgehog Concept. In 2001, Jim Collins applied a philosophical idea by Isaiah Berlin to business. His insight was that companies with a hedgehog-like focus (who view the world through the lens of a single defining idea) outperform all others.

These hedgehog companies tend to focus on three key elements:

These three questions can be applied when thinking of new ideas. By choosing something your passionate about, it increases the likelihood of success through perseverance. Focusing on something that you are really good at gives you a competitive advantage over others. And by ensuring it’s something that can make you enough money means the idea is sustainable. 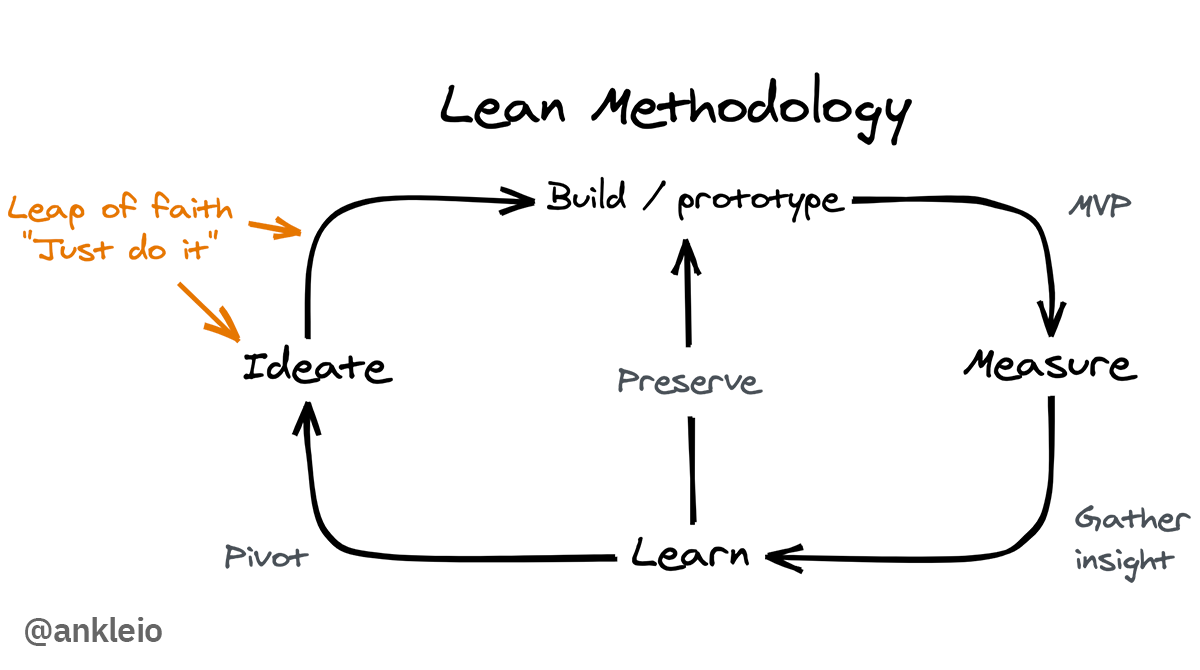 Perhaps Nike is right; we should “Just Do It.” It may sound naive, but applying scientific rigour to the process, through popular methodologies like the Lean Startup by Eric Ries may be one of the best methods of validating ideas.

This is an iterative process that focuses on testing assumptions and continually making improvements through a series of pivots.

Choosing a medium that allows quick implementation and feedback is crucial for this process, and it applies extremely well for software.

Paul’s final sentence definitely sums his article up well, “Live in the future and build what seems interesting.”

And perhaps, instead of dilly-dallying with ideas, brainstorming sessions, research, learning, reading, writing, and drawing diagrams (ahem), perhaps it’s best to just dive into something interesting, prototype quickly, and validate the idea for real.